By Esat Firat and Mustafa Deveci

JERUSALEM (AA): At least 14 Palestinians were injured late Sunday in clashes with Israeli police in East Jerusalem, according to the Palestinian Red Crescent.

Four of those injured in the Israeli attacks near Damascus Gate and in the Sheikh Jarrah neighborhood were hospitalized, it said in a statement.

A health professional was also injured when Israeli forces targeted an ambulance belonging to the Palestinian Red Crescent with rubber bullets and stun grenades during clashes in the At-Tur neighborhood, it added.

Two journalists were also among those injured during the conflicts near Damascus Gate and in Sheikh Jarrah.

Many Palestinians have been taken into custody by police, said the statement.

Palestinians in Jerusalem in recent days have protested in solidarity with residents of Sheikh Jarrah amid attacks by Israeli police.

The crisis stems from a ruling by the Israeli Central Court in East Jerusalem, which approved a decision to evict seven Palestinian families from their homes in favor of Israeli settlers at the beginning of this year. 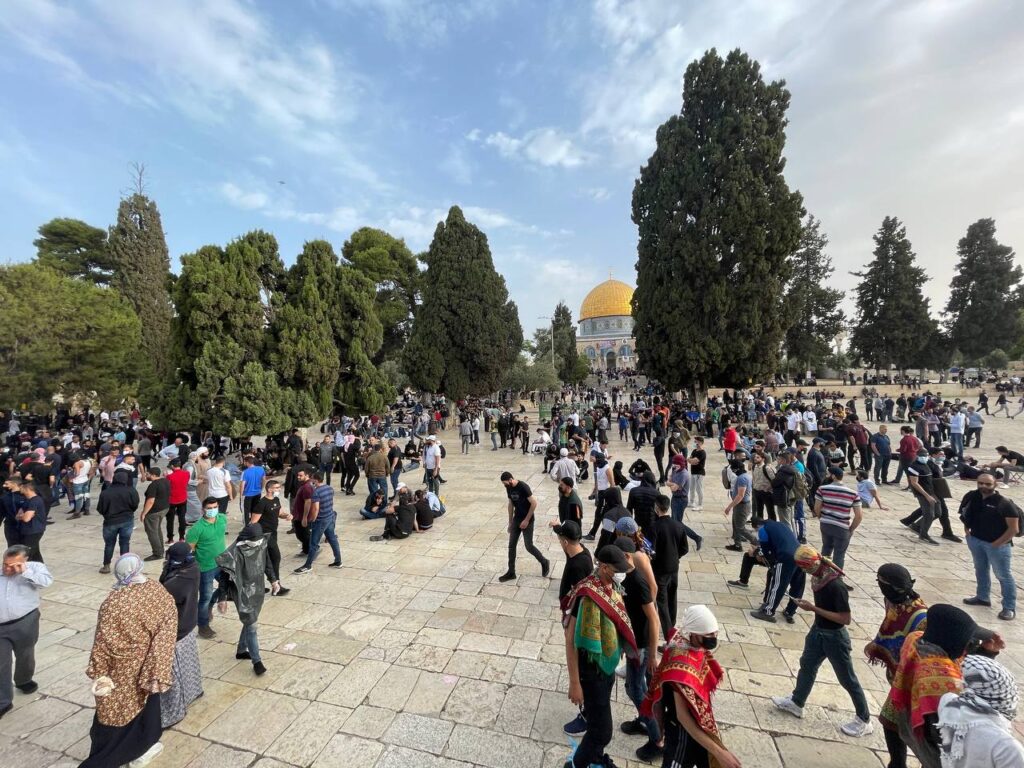 Israeli police attempted to disperse worshippers inside the Al-Aqsa Mosque compound Friday evening using stun grenades and tear gas. Hundreds of Palestinians were injured in the attacks, which have been condemned worldwide.

First Minister of Scotland, Nicola Sturgeon, called on the Israeli government to listen to calls by the international community and cease its attacks on Islam’s third holiest site as well its illegal evictions of Palestinian residents in the occupied neighborhood of Sheikh Jarrah.

“Attacking a place of worship at any time is reprehensible, but attacking a mosque during Ramadan is utterly indefensible,” Sturgeon tweeted.

“It is also a violation of international law. Israel should heed calls to halt the violence immediately,” the first minister added, using the hashtag #SheikhJarrah that has been trending on Twitter in the past week.

Israel’s recent illegal measures amount to “war crimes” under international humanitarian law, and those committing the “ruthless violations” in East Jerusalem must be prosecuted, the Independent Permanent Human Rights Commission said in a statement released Sunday.

Part of the Organisation of Islamic Cooperation (OIC), the commission condemned Israel’s illegal and brutal use of force against protesting Palestinians, saying it is “appalled by the brutality.”

The commission also noted that attacking Muslims during the holy month of Ramadan was a serious violation of their right to freedom of religion.

“It is simply inhuman to attack the innocent unarmed worshippers with water cannons, stun grenades and rubber-coated bullets,” the statement said.

It further said that the commission called on the UN Security Council, the Quartet — the European Union, Russia, the UN and the US — as well as the international community “to force Israel to desist from these inhuman brutalities.”

Israeli police on Friday attacked Muslim worshippers inside Al-Aqsa Mosque while they were performing tarawih — special night prayers during the Muslim holy month of Ramadan.

The Al-Aqsa Mosque and the Dome of Rock also sustained damage, with windows being shattered and walls riddled with steel coated rubber bullets.

Demonstrations were held across the UK on Sunday in solidarity with Palestinian worshippers who were attacked by Israeli soldiers inside the Al-Aqsa Mosque.

Organized by the Palestinian Forum in Britain and other groups, people gathered outside Downing Street in London and the city center of Manchester to express their outrage toward the violence committed against Palestinians in Jerusalem.

Israeli Prime Minister Benjamin Netanyahu on Sunday said they will continue building illegal settlements in Jerusalem in remarks that are likely to escalate ongoing tensions.

Al-Aqsa Mosque is the world’s third-holiest site for Muslims. Jews call the area the “Temple Mount,” claiming it was the site of two Jewish temples in ancient times.

*Writing by Dilan Pamuk in Ankara