GAZA CITY, Palestine (AA): The number of those killed in attacks by Israeli forces on the Gaza Strip late on Monday rose to 24 and the wounded to 103, according to the Palestinian Health Ministry. UK condemned Hamas for the retaliatory rocket attacks against Israelis, however, did not condemn attacks by Israel injuring hundreds on Muslim worshippers in Al-Aqsa Mosque.

Casualties increased by three following the latest attack, it said.

The strike hit a house in the west of the Gaza Strip. One of the killed was a woman and another was a disabled person, an official from the Civil Defense teams told Anadolu Agency.

One of the nine children who were killed was a 10-year-old girl and the others were boys of various ages, the ministry said.

The Israeli army announced the launch of Operation Guardian of the Walls late on Monday against the Gaza Strip.

It also announced that an air attack had been carried out on the Gaza Strip, from which many rockets have been fired into southern Israel.

“The UK condemns the firing of rockets at Jerusalem and locations within Israel. The ongoing violence in Jerusalem and Gaza must stop. We need an immediate de-escalation on all sides, and end to targeting of civilian populations,” Raab said. 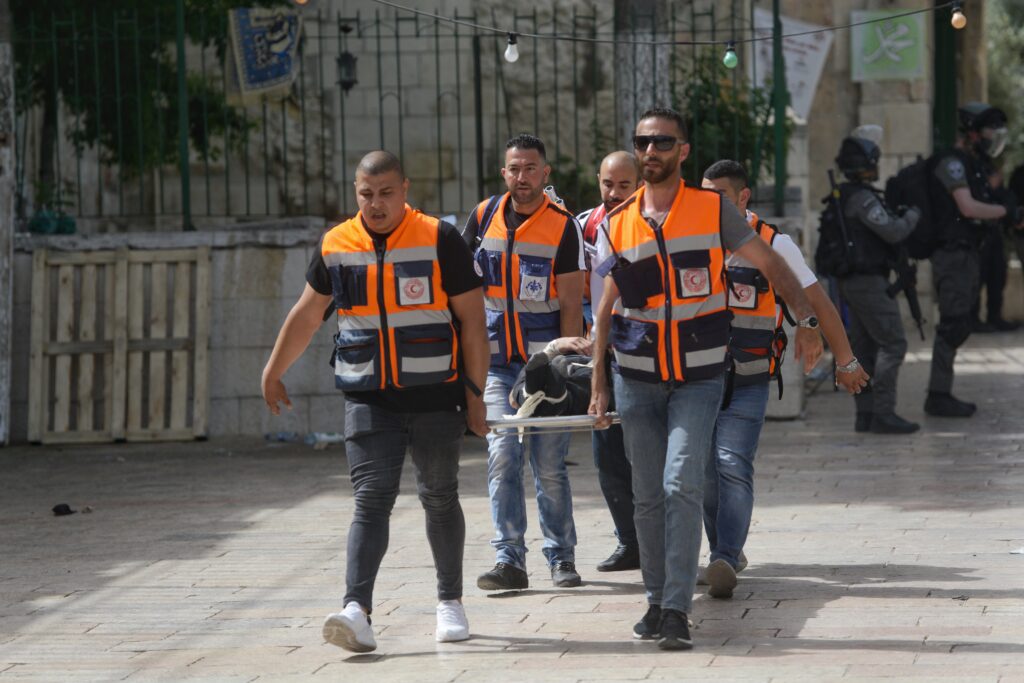 In a statement, the Palestinian Red Crescent said 281 people were injured in the attack.

The Israeli police used plastic bullets and stun grenades in the Haram al-Sharif, it said, adding 161 of the injured were taken to hospitals.

The number of injured in the attacks since early Monday rose to 612, with 411 of them treated at hospitals.

Some of the Israeli police withdrew from the Haram al-Sharif and all of the wounded were evacuated from Al-Aqsa Mosque, Firas al-Dibs, a spokesman for the Jerusalem Islamic Waqf, said in a statement.

The police intervened with plastic bullets and stun grenades in a dispute between young Palestinians and Israeli police in front of Al-Aqsa’s Al-Maghariba Gate, he said.

During the attack, a fire broke out and spread to a tree in the Haram al-Sharif, Dibs said, adding it was extinguished by the fire brigade.

The attack continued for a long time, he added.

Young Palestinians set up small barricades inside the Al-Aqsa Mosque complex, located in the Old City of Jerusalem, and hung Palestinian flags.

Tensions have been running high in the Sheikh Jarrah neighborhood of occupied East Jerusalem since last week, when Israeli settlers swarmed in after an Israeli court ordered the eviction of Palestinian families.

Palestinians protesting in solidarity with the residents of Sheikh Jarrah have been targeted by Israeli forces.​​​​​​​

Israel occupied East Jerusalem during the 1967 Arab-Israeli war and annexed the entire city in 1980 — a move that has never been recognized by the international community.

[Photo: A wounded Palestinian child is being brought to Indonesian Hospital to receive medical treatment after Israeli airstrike in the Gaza Strip, on May 10, 2021 in Beit Lahia, Gaza. Photographer:  Ali Jadallah/AA]