GAZA, Palestine (AA): Local media in Gaza have reported that the death count from the Israeli airstrikes on al-Wihda Street in al-Rimal neighborhood in Gaza City before dawn on Sunday has reached 26, at least five of whom are children.

The missile strikes killed 13 members of the al-Kulk family, ranging in age from 1 to 85, as they huddled in their homes in terror while the Israeli airstrikes continued throughout the night. Local Palestinians have reported hearing as many as 150 Israeli bombs during the course of the night.

One of the families wiped out by an Israeli missile Sunday morning was that of Riyad Hasan IshKinatna, who was pulled out of the rubble Sunday morning by rescue crews, barely alive, only to be told when he reached the hospital that his wife and five children were all killed in the Israeli attack.

Also killed in the barrage of airstrikes on al-Wihda Street was Dr. Mo’in Ahmad al-Aloul, a neurologist and brain specialist.

The search is still going on for missing persons.

38 people were injured in the West Bank on Saturday when Israeli forces attacked demonstrators who gathered to mark the Nakba Day and protest Israeli attacks.

According to the witnesses, two more bodies were found under the debris of a house demolished by Israeli airstrikes.

Twenty people were taken from the debris alive, they said.

Israeli warplanes carried out simultaneous airstrikes on different areas of Gaza. Strong explosions were heard in the west, north and south of the city.

Witnesses said the attacks were heavy and houses and streets were bombarded. They said houses were hit without prior notice and there were injured people under debris.

Israel’s prime minister said on Saturday that attacks on the blockaded Gaza Strip would continue.

The 13-story building targeted by Israeli missiles was one of Gaza’s oldest multi-story buildings. It had 60 units, including offices of media companies, legal firms and doctors.

Meanwhile in the West Bank, two Palestinians were reportedly killed late Saturday by Israeli forces in southern and northern West Bank, bringing to 17 the number of Palestinians killed there since Monday. 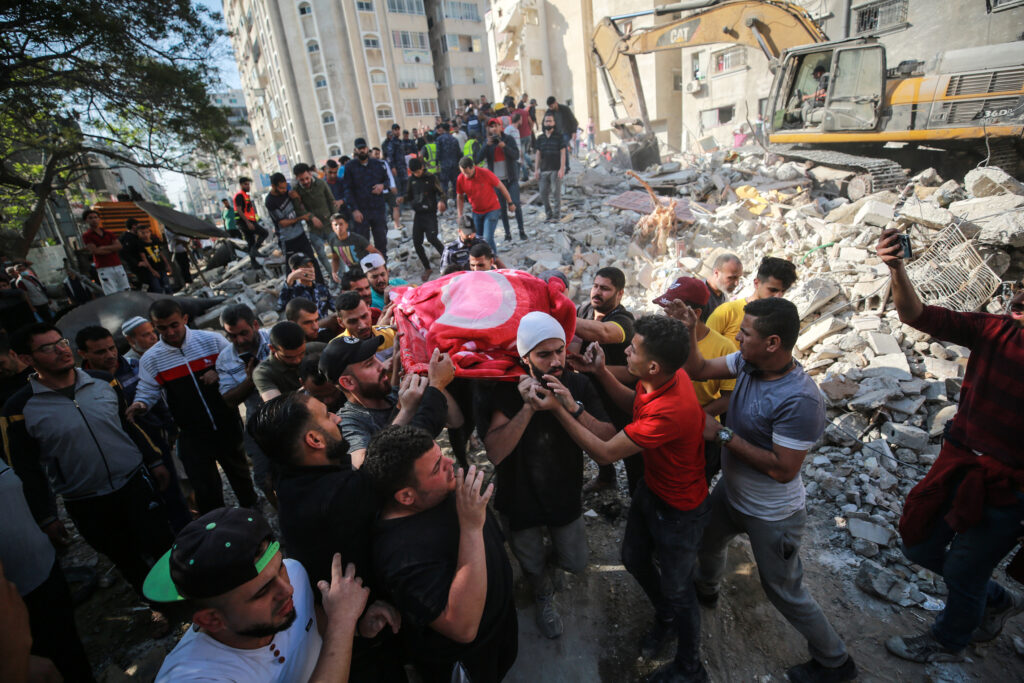 [Search and rescue works are conducted at debris of a building after being bombed by by Israeli airstrike in al-Rimal neighborhood of Gaza City, Gaza on May 16, 2021. Photographer: Mustafa Hassona – Anadolu Agency]

Palestinian Health Ministry said a Palestinian, who was not identified, was killed near the al-Fawwar refugees camp in Hebron, southern West Bank.

Witnesses told Anadolu Agency that Israeli forces opened fire on a car, then prevented ambulances from providing aid to the driver.

Israeli forces used live and plastic bullets as well as tear gas against the demonstrators, and Palestinians responded by throwing stones.

They included residents of the area and people gathered in solidarity with the Palestinian families facing eviction from the neighborhood after an Israeli court’s order.

Maysoon Ghosheh, a woman living in the neighborhood, was assaulted by Israeli security personnel who were trying to enter her house.

Palestinians were protesting peacefully in the area before Israeli forces assaulted them, the witnesses said.

There were no immediate details about any casualties.

UN chief Antonio Guterres is “deeply disturbed” by an Israeli attack that targeted a multi-story building housing the offices of media organizations, his spokesman said Saturday.

38 people were injured in the West Bank on Saturday when Israeli forces attacked demonstrators who gathered to mark the Nakba Day and protest Israeli attacks on the occupied Gaza Strip, the Palestinian Red Crescent said.

The aid body said in a written statement that 28 people were injured by live bullets while 10 others sustained injures by rubber-coated bullets.

On the 73rd anniversary of Nakba, or The Catastrophe, Palestinians held demonstrations in the cities of Hebron, Ramallah, and Qalqilya, especially in the Kusra town of Nablus, in the West Bank to protest Israel’s attacks on Gaza,

Tensions have been running high in the Sheikh Jarrah neighborhood of East Jerusalem and at the Al-Aqsa Mosque and Damascus Gate since the start of the Muslim fasting month of Ramadan as Israeli forces and settlers assaulted Palestinians.

Tensions moved from East Jerusalem to Gaza after Palestinian resistance groups there vowed to retaliate for Israeli assaults on Al-Aqsa Mosque and Sheikh Jarrah if they were not halted.

Earlier Saturday, Hamas’ military wing, the Ezzeddin al-Qassam Brigades, said rocket attacks were carried out in response to Israel’s attacks on multi-story buildings and houses where civilians live in Gaza.

[Photo: Smoke rises after Israeli forces destroyed a 13-storey media building in Gaza City where Al-Jazeera, Associated Press had their offices, on May 15, 2021. Photographer: Ali Jadallah/AA]