JERUSALEM (AA):  Many Palestinians were injured after Israeli police fired rubber bullets at them and detained 51 Muslims, including an Algerian-origin French Muslim, while guarding hundreds of Israeli settlers that invaded the Al-Aqsa Mosque in the occupied East Jerusalem on Thursday .

On the occasion of Israel’s foundation anniversary, Israeli settlement groups have called for a large-scale incursion into the Al-Aqsa Mosque, the world’s third-holiest site for Muslims.

Jews call the area the “Temple Mount,” claiming it was the site of two Jewish temples in ancient times.

The Jordan-run Islamic Waqf Department, which oversees holy sites in Jerusalem, said in a statement that a total of 792 settlers stormed the Al-Aqsa Mosque, with 599 on Thursday morning and 193 in the evening.

Yomtob Kalfon, a member of the Israeli Knesset (parliament) from the Yamina party, and Yehuda Glick, a former Knesset member from the Likud party, were among those who stormed the mosque.

During the incident, Israeli settlers attempted to raise the Israeli flag twice, while scores of them chanted the Israeli national anthem, according to eyewitnesses.

They said Israeli police beat worshipers and fired rubber bullets and tear gas canisters at them in the Qibli Mosque, which is located within the Al-Aqsa Mosque compound, where scores of worshipers were present at the time.

“Our crews provided first aid to two injuries from Al-Aqsa Mosque, as a result of the beatings, and they were transferred to Al-Makassed Hospital for treatment,” the Palestinian Red Crescent said in a statement.

The Islamic Waqf Department added that the Israeli police detained 50 Palestinians and the Algerian-origin French national who was attacked in the courtyard of the Al-Aqsa Mosque.

A video clip circulating the social media shows Israeli policemen holding the Algerian citizen, whose name was not revealed, outside the mosque after they removed her headscarf.

The Israeli police, for their part, argued in a statement that dozens of people shouted “incitement calls” and threw stones at them.

“A policeman was slightly injured,” it added. 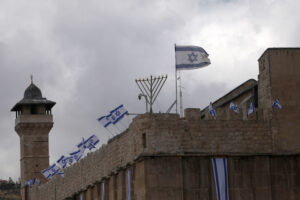 A view of Harem-i Ibrahim Mosque after Israeli forces planted Israeli flag on the mosque and placed a seven-branched candelabra used in Jewish worship, in Hebron, West Bank on May 05, 2022. It was also stated that yesterday, the evening and night prayer the azan (call to prayer) were again blocked by Israeli forces. (Photographer: Mamoun Wazwaz – Anadolu Agency )

Meanwhile a group of Israeli settlers raised the Israeli national flag atop the Ibrahimi Mosque in the West Bank city of Hebron ahead of Israel’s Independence Day, local media reported Wednesday.

Nedal al-Jaabari, the head of Hebron’s Waqf, or Islamic endowment, which is in charge of administering the mosque, condemned the act “as a provocation to the feelings of Muslims and a blatant violation of the sanctity of holy sites and of all international conventions and norms,” said the Palestinian news agency WAFA.

According to the news agency, a group of settlers guarded by Israeli forces placed the flag on top of the Muslim holy site to celebrate Israel’s Independence Day. Celebrations marking the day began on Wednesday evening.

On Feb. 25, 1994, during the dawn prayer in Ramadan at the Ibrahimi Mosque, hundreds of Palestinians were attacked in mass shootings and bombings. The gruesome attack left 29 Muslim worshipers dead and dozens of others wounded.

Palestinians say the attack was planned by a group of Jewish settlers with indirect assistance from the Israeli army, which was not at the scene during the massacre.

Muslims attach great value to the Ibrahimi Mosque, as they believe it was built above the tomb of Prophet Ibrahim (Prophet Abraham).

Jewish settlers also revere the place, calling it the Cave of the Patriarch due to their belief that the tombs of Prophet Abraham and his wife Sarah are located in a cave below the mosque.

* Writing by Bassel Barakat in Ankara.

[Photo: Israeli settlers storm Al-Aqsa Mosque, the world’s third-holiest site for Muslims, on the occasion of Israel’s foundation anniversary, in Jerusalem on May 05, 2022 with Israeli police escort. Large number of Palestinians were injured after Israeli police fired rubber bullets at them and detained 51 Muslims, including an Algerian-origin French Muslim, while guarding hundreds of Israeli settlers that invaded the Al-Aqsa Mosque in the occupied East Jerusalem. .
Photojournalist :Mostafa Alkharouf/AA]