KARACHI, Pakistan (AA): At least 16 people were killed and nearly a dozen injured in a suspected gas leak explosion that shook the southern port city of Karachi, police and health officials said.

The explosion occurred outside a building in Shershah area, an industrial district of Karachi, which serves as the country’s commercial capital, causing the roof and walls to collapse.

Health Minister for southern Sindh province, of which Karachi is the capital, Dr. Azra Pechuhu, told reporters that at least 16 people were killed and 11 injured in the blast.

The deceased included the father of a ruling party parliamentarian, Alamgir Khan.

All 11 people being treated for injuries are in critical condition, he added.

According to the initial investigations, the police said, the blast is believed to be the result of leakage in a nearby gas pipeline. Further investigations to ascertain the cause are underway, the police added.

Footage aired on local broadcaster Geo TV showed rescuers scrambling amid the rubble to pull out bodies and injured, taking them to nearby ambulances.

Several vehicles parked outside the building were completely or partially charred as broken glass, metal pieces, and blood-soaked shoes and caps and clothes were strewn at the site.

Authorities said that the building, which also housed a private bank, was illegally constructed on a drainage line.

Industrial accidents are common in the South Asian nuclear state, where safety standards are lax.

Prime Minister, Imran Khan, offered “heartfelt prayers” & “condolences” to the families of the victims. “I am especially saddened to hear of the loss of our MNA Alamgir Khan’s father who also perished in the blast,” PM tweeted.

One killed in bomb explosion 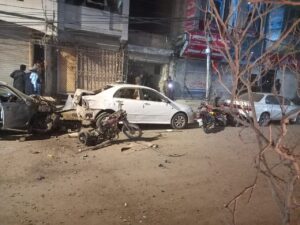 A view of the scene after the explosion of a bomb placed on a parked motorcycle in Quetta, Pakistan on December 18, 2021. ( Mazhar Chandio – Anadolu Agency )]

At least one person was killed and another ten injured in a bomb blast in Quetta, the capital of southwestern Balochistan province.

The bomb, planted in a motorbike parked in a busy street, was detonated through remote control, the police said.

Dr Waseem Baig, a spokesman for the Civil Hospital Quetta, told reporters that one body and six injured were brought to the hospital.

No group has claimed responsibility for the blast. However, security agencies point a finger of blame on Baloch separatists, who have long been targeting the security forces in the mineral-rich province.

[Photo: A view of the site after an explosion in the Paracha Chowk area of the Shershah, Karachi, Pakistan on December 18, 2021. Photographer: Sabir Mazhar/AA]