COX’S BAZAR, Bangladesh (AA): Ten-year-old Rukiya Begum is one of the dozens of Rohingya children and teenagers in Bangladesh’s refugee camps who lost everything, including educational support, in Monday’s deadliest fire that killed at least 15 members of the persecuted community and injured over 500 others, according to the UN.

The long-faced girl was sitting next to a pile of her gutted tent waste, struggling to read her half-burnt book with her tiny hands.

Begum was unconcerned about the disasters and the loss of the family tent, as she considers it as her parents’ issue, who were trying to rebuild their home from the ruins.

“My house, my learning center, and my educational materials have all gone. I just got this half-burnt book that I like very much, and I am trying to read it,” Begum told Anadolu Agency.

Begum and dozens of other children have lost their basic educational facilities due to Monday’s disaster, which destroyed over 10,000 shelters, including learning centers, schools, Muslim seminaries, a hospital, health care centers, shops, and many other settlements.

This immense tragedy seems to have destroyed Rohingyas’ shelters but not their dreams.

“In Sha Allah [by the will of Allah], everything will be restored, and our children will restart their education,” said Abul Hayaet, 60, who was sweating heavily while reconstructing his damaged family tent in the humid Cox’s Bazar camps.

Hayaet was a petty fish trader in his home country, western Rakhine state of Myanmar, before fleeing to Bangladesh in August 2017. He started the same business in a camp-based market.

The fire annihilated the Bolibazar market, including Hayaet’s store, which had a till and some money to operate his business.

His priority is to rebuild his family tent so that his six-member family has a shelter to stay.

Speaking to Anadolu Agency on Wednesday evening, he said one day after the destruction, he returned to his home site and spent the last two nights under the open sky, and eating dry foods provided by aid agencies.

Hayaet’s mother, 75-year-old Muhsina, was also busy removing rubble to assist his son in resettling the tents with bamboo and tarpaulin sheets. 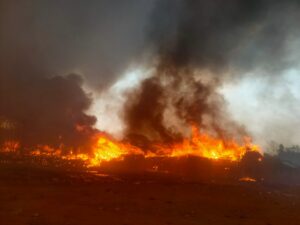 COX’S BAZAAR, BANGLADESH – MARCH 22: A view from the Balukhali Rohingya camp after a huge fire broken out in Cox’s Bazar, Bangladesh on March 22, 2021. ( Stringer – Anadolu Agency )

“My three grandchildren attend camp schools, and when their classes resume, we will have to buy them books, notebooks, and pencils,” Muhsina said.

In another nearby tent, 10-year-old Rohingya boy Yasin Arafat was helping his parents to reset their house. The grade 4 student dreams of restarting his studies, but like Begum, he has also lost his school, home, and all educational materials.

Grappling with the crisis, the oppressed Rohingyas started rebuilding tents just two days after the tragedy, expecting a better future.

“This is not new to us. Even in our home country, our people have been burnt alive by the Myanmar army. We are still survived. We hope that our next generation will have a better life than us,” Mufti Aminul Mostafa, an Islamic seminary teacher, told Anadolu Agency.

Mustafa is the head of the largest seminary (madrassah) in the Rohingya camps.

“We teach from level 1 to level 12 and have 712 students, 30 teachers, and other staff members. Now we have no room to run the seminary as all our settlements have been completely destroyed in Monday’s fire,” Mostafa said.

Just pillars remain at the site, and Mostafa is preparing to reconstruct the institute based on those pillars.

“We hope that the Bangladesh government will immediately remove all barbed wire fences that have been erected around the Rohingya camps to avert crimes and smuggling. Dozens of us were wounded during the Monday’s disaster due to these fences,” Mostafa claimed.

He suggested that the installation of more closed-circuit cameras may help prevent crimes.

Human Rights Watchdog, in a statement issued on Thursday, asked the Bangladesh government to immediately remove the fences surrounding the camps in Cox’s Bazar and to release the findings of its investigation into the deadly fire.

“Refugees have horrifying accounts of being trapped inside the barbed wire fencing as the fire swept through the Rohingya refugee camps,” said Brad Adams, the watchdog’ Asia director.

Meanwhile, during a visit to the damaged camps on Wednesday, Home Minister Asaduzzaman Khan Kamal said the government would stand by the Rohingya refugees.

“We are doing everything for the safety of Rohingya and a peaceful repatriation to home country Myanmar,” said Kamal.

Two investigation committees have been formed to dig out the causes of the fire, the minister said, adding that “if anyone is found involved, they will be brought to book.”

He also assured that none of the persecuted people would be forced to relocate to a remote southern island of Bhasan Char, where the government has already sent nearly 14,000 Rohingyas as part of shifting 100,000 members of the stateless community amid international oppositions on safety ground.

Rohingya diaspora across the world have also expressed concerns due to the frequent fire incidents at Rohingya camps.

Earlier, in January this year, another deadly fire destroyed above 500 Rohingya shanties. Besides, dozens of minor fire incidents have been reported at Rohingya camps since the mass exodus of the genocide survivors in August 2017.

[Photo: Rohingya family siting beside burnt out refugee home in Ukhia after a big fire swept through the camp and destroyed thousands of homes Cox’s Bazar, Bangladesh on March 24, 2021. Photographer: Stringer/AA]

The post Bangladesh: Fire destroyed Rohingyas shelters but not dreams appeared first on The Muslim News.